Modern Wi-Fi Access Points are now capable of much higher transmit powers than the client devices. They can run at 200mW, with the average small client device running at 25mW.

One technique to limit transmit power in a Wi-Fi network is to use RF power caps on the APs.

Why too much RF Power is Bad

Makes sense doesn’t it? From a superficial level it does – but actually when you’re supporting lower power devices it doesn't.

Let’s take a trip back in time: Five years ago, most people only ever connected laptops. Nice big batteries, nice big antennas - and they don’t roam very much in operation (this is the important bit).

Coverage tended to be pretty sparse in terms of AP density and although everyone noticed the coverage wasn’t that great, it was good enough (work's ok in the lunchroom right?).

At the time, the APs and the clients were pretty well matched in terms of capability.

The network design has to change to meet this. This is particularly true in environments that really rely on Wi-Fi - such as Warehouse Wi-Fi or Clinical Wi-Fi.

For a bit of side reading on the most common Wi-Fi issues, take a look at The Top 8 Secrets to Great Wi-Fi

Try and connect a Wi-Fi phone to that old fashioned network though, and you’ll experience some pretty serious dropout and it will just not roam properly. 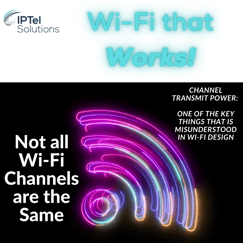 The APs have also become more powerful in the last few years too – restrictions have changed and the APs are now allowed to transmit more power on some channels.

On some channels? Yes – its strange, but not all Wi-Fi channels are identical.

So, what are you left with?

If you spark up your network and don’t have enough AP density, the APs will run at maximum power. On 5GHz (channel dependent as I say), some will be 25mW and some a whopping 200mW.

Let’s look at how this would look if those APs were a group of people in a room: you’d have some people transmitting whispering right next to people with a megaphone shouting. I've explained this concept in another blog, titled Wi-Fi and the Cinema Story.

Even right next to the guy whispering, the guy with the megaphone is going to drown him out. This is just the Transmission (TX) side of things.

The Wi-Fi site survey must be designed to take today's clients into account and design at the correct power level. 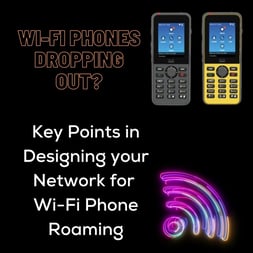 How does it look from a client point of view? Well, a Cisco phone has only 40 mW maximum transmission power (this was the Cisco 7925 - it's lower for the newer Cisco 8821).

Do you want a much higher power device, such as a phone transmitting at higher power right next to your head?

The phones have lower transmit power and a smaller antenna than the AP.

APs running at high powers mean that a phone will try and connect to the AP it can hear the best - and the loudest AP appears to be the best AP (even if it's not actually closer).

The phone is listening to the RSSI of the AP to work out which is closer. It doesn’t know you’re right under an AP, only that the distance 200mW AP appears like a better choice.

Let’s look at what happens if you apply power caps to your APs.

Yes – you are indeed hobbling the AP, and restricting what the AP can do, but it’s for a specific purpose.

You’ll re-balance that conversation to have two people talking at an even volume to each other. When this happens devices start to roam properly.

The 30 Technical Wi-Fi Thoughts blog is a good resource, if you wanted to read more about the type of issues you need to resolve to get voice working correctly over Wi-Fi.

RF Power caps mean that your APs are limited to the maximum power they can transmit at.

The exact power you should limit the APs to transmit at - as well as other settings, such as the ambient (TX threshold) power - all need to be considered in unison.

I often refer to Wi-Fi as a bit of an elastic band - you can't have it all, so you need to decide what's more important.

AP Power caps are a tool in the armoury, to adjust the network and in doing so, the experience of the your network users.

If you're getting issues with dropouts, poor performance and other Wi-Fi problems, take a look at our blog on the Wi-Fi Assurance Review.

What is EIRP: EIRP vs Transmit Power