Wi-Fi works with radio waves. These are similar in nature to sound you can hear (not exactly, but let me have a little artistic licence).Why do you need to have Wi-Fi that works within reasonable RF power bounds? I've come up with a little story to help. Let's translate Wi-Fi in to audio. So here's the story..

Imagine you're in a cinema. There's cracking Dolby surround sound, making the movie come alive with sound hitting you from all angles. The sound is crystal clear and has that great effect of having sound effects hit you from all sides. 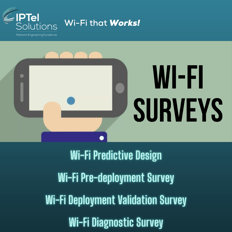 This is just like a properly designed wireless network - you have equitable access to the sound (or RF) from wherever you sit.

If you walk around the cinema (if you could without annoying everyone), you'd find the sound is just as good no matter where you sat.

The reason? There's lot of speakers, each working at a certain volume, to build up the overall experience. No speaker is running at too high a power - an important concept for Wi-Fi.

I've touched on the subject of power caps. The issue is a reasonably simple one about not having an AP blasting at maximum power, while you have a low powered device broadcasting back.

How does this theory affect the design for Wi-Fi? Let's take a look.

The Minimalists Approach to Wi-Fi Design

Back to Wi-Fi for a minute - if you went for the 'minimalists' approach and decided to use as few APs as you could, you'd find that you would have to turn them all the way up. Let's explore in our cinema setting what that would do. 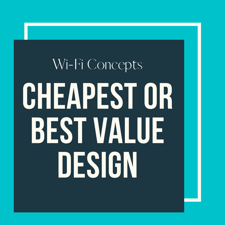 You're sat in your seat enjoying the movie, thinking it would be nice if the sound were a little louder.

Going for that walk around the cinema, you discover there's places that the sound is okay and places its really hard to hear.

Speaking with the cinema manager, he realises that the volume knob has been way down. Great! Let's just turn it up and that will solve the issue!

You return to your seat and the sound it just right now! The problem has been solved - how easy was that! No additional speakers, just turning them up has fixed it.

Walking around though you notice that there are areas of the cinema no one is sitting in. Going to those spots, you realise that you're right under a speaker and its ridiculously loud - no wonder no one wants to sit there.

What you've discovered is that to get a nice smooth sound experience you can't just turn the power right up on a few of the speakers, you need to add some more, so none of the speakers are too loud, but the sound is nice and even.

Think about your minimal number of APs running at full power - not only are they blasting out right under them, but clients will not roam easily, sticking to the AP they think is so good, even though they should have roamed. We need to solve this with proper RF designs, which provide for equitable levels of RF power across a building.

Cinema's use a lot of speakers to ensure that you have crystal clear sound. How would this sound with one speaker at the front of the auditorium, turned up to maximum power?

So, the Cinema manager decided he was going to employ someone who knows nothing about speakers and sound to install his audio system. He figured that he can always fix it up later on.

When they arrived to do it, they figured that the shortest cable runs would be to install all the speakers on one wall.

They're pretty directional, and with a bit of extra volume all good!

The people in the cinema didn't agree.

The sound was terrible now with interference from all those speakers and the audio sounding like it was all over the place. The Dolby didn't work any more either - everything was coming from the left hand side, which didn't make sense when you look at the screen.

There are technologies such as Cisco's RX-SOP to help mask the effects of RF interference, but the best bet is to try and reduce this during the design phase.

This is just the same in Wi-Fi.

If you're presented an Access Point layout where someone has placed them on a grid pattern (likely only up and down the corridors) they clearly haven't designed it with any modelling software to make the coverage even.

Location tracking isn't going to work and you will get dropout when clients are roaming.

Increasing access point density helps lower the average ambient power, bringing the transmit and receive into equilibrium with each other.

The conclusion is that if you want Wi-Fi to work properly, you need to get a proper WLAN site survey.

Surveys are one aspect of the equation - we've also touched on the subject of RF tuning. You can't just install it and hope it will magically just work - there is some tuning to be done.

A simple rule of thumb, if you have someone designing your Wi-Fi - are they asking you what you want to do with the network? What are your use cases? What kind of clients do you want to support?

If you don't get asked these sort of questions, think twice about the people doing your designs. The cheapest Wi-Fi installation is most definitely not the best value!

If you've got phones dropping out and people complaining of poor coverage, you have probably already had the design done incorrectly. We are the Wi-Fi experts - contact us today.

Hopefully the Wi-Fi Design and the Cinema story has been an interesting read.

Wi-Fi and The Problem With RADAR (DFS)