One of the most common issues we see when fixing up poor performing Wi-Fi networks, is lack of APs. Sufficient AP density and placement are the basics of proper Wi-Fi RF Design.

We took a look at the theory behind why you would want to increase Wi-Fi AP density, in the Wi-Fi and the Cinema Story blog, if you wanted to have a background read.

We often undertake jobs where there's an existing layout of Access Points. It can be at a variety of densities when we start:

The challenge is to increase the AP density from Hospot or Data Grade Wi-Fi up to:

- RTLS (highest grade, supporting a density of APs to triangulate devices) while maintaining the existing AP locations but supporting the grade that was asked.

The sample image here provides a bit of a case in point:

We often get asked to come to a site and survey and advise on where to add the extra APs. This is often due to looking at the cheapest cost when installing your Wi-Fi network, not the best value. The best value delivers the right number of APs to make your network work properly.

The problem is, for sites with low density of APs, this is a flawed approach. We can survey, sure, we'll find out how the coverage is, but with the APs all running at maximum power.

Assuming that Transmit Power Control (Cisco) or Adaptive Radio Management (Aruba) are running, APs will be running at maximum power. So, we've surveyed, the APs are running at 200mW, the coverage looks great, but devices are dropping out. We see this all the time - so what's the approach, if it's not an onsite survey?

If the AP density is pretty close to where it needs to be, a post install survey and addition of APs based on this data is a good way to go. 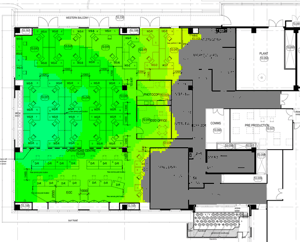 If, for example. the AP density is low though, it's just too hit and miss. We need to go back to first principles, and design it properly. This means a desktop predictive RF survey - a predictive model is undertaken and we can use the existing AP locations and add more APs.

The customer can retain the value in the existing cabling and we work out how best to add the new APs. The use of predictive modelling may seem counter intuitive when APs are already deployed, but it allows us to quickly test a variety of AP placements, to optimise the design.

No on-site RF Survey Needed then?

This isn't quite true either. We just use it in a different way.

Every desktop predictive Wi-Fi survey should be countered with an onsite AP-on-a-Stick (Pre-Install) survey.

An example rig is shown in the photo here, which we use for Pre-Install surveys.

For a greenfield site, we'd bring a rig onsite with a powered Access Point and measure with that.

In the case of pre-existing RF Surveys, we can survey and examine the RF drop on either side of the walls - this allows us to confirm the wall density, which feeds back into the predictive model to make it a more accurate representation.

Either way, the onsite survey is required, in order to get an accurate picture of the site.

Fixing up Wi-Fi should include a methodical approach to determining the best method to fix the issues at hand, with the most logical place to start being the Wi-Fi survey, a part of which is AP density.

The summary is that for low density deployments, we can't necessarily just do a post-install survey and come up with a magic answer. It needs some more detailed design to come to that - so a blend of post install and predictive survey is needed to really produce the optimised design.

If you're interested in some further resources, the Top 8 Secrets to Great Wi-Fi is a free resource, aimed at helping understand the range of factors that contribute to a working Wi-Fi solution.