It’s probably fair to say that most of us don’t enjoy dealing with any kind of licensing fulfilment because the experience can be somewhat daunting.

Cisco offers the use of Cisco Smart Licensing as a way to ease the burden of network device licensing.

Smart licensing offers a couple of key advantages for licensing Cisco software - you won't ever lose a license again, and you can spread licences across sites. This means that you no longer need to buy excess licences for your sites, because they come in certain sized PAKS, but pool the licenses in the cloud and call them off as you go.

This blog is accompanied by a sister blog on the subject of Cisco Smart Licensing.

Network devices that require a license to operate would either be configured in RTU (Right To Use) which is an honour based system, or have a static license file uploaded to them. 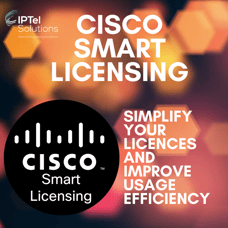 Each device had its own arcane method of licensing and this operation was usually performed at the commissioning stage and then forgotten about. If a device required additional licenses, the procurement process would typically deliver a PAK file (paper or electronic) and the Licensing Operator would convert that PAK into a license file that had to be uploaded to the device.

Multiply that across tens of different Cisco product families and hundreds or thousands of devices.

Smart Licensing addresses the following issues that we used to face with traditional licenses:

Smart Accounts and Smart Licensing are not the same thing – but they are related. Licensing Cisco products prior to the Smart era, consisted of a single portal that held an inventory of all the licenses purchased, and whether or not they had been claimed.

That method of license management is akin to basic record keeping. After a product is purchased, the associated PAK files had to be converted into licenses, which were then transferred to the individual devices.

A very manual process. This method did not address the requirements of large organisations with ever growing devices, let alone having a consolidated view of license usage/compliance. Enter Smart Accounts.

Smart Accounts can be further sub divided into one or more Virtual Accounts which contain the actual license entitlements.

Every Smart Account has a default Virtual Account but there is a lot to be gained by creating Virtual Accounts that align with your organisation’s structure and compliance requirements– e.g. one account per site or business unit.

Gone are the days of dumping all the licenses into a single folder – it’s easy to lose track of where the licenses ended up. Cleverly named Virtual Accounts are self-documenting and they are the steppingstone towards the next evolution – Smart Licensing.

Cisco Devices that are enabled for Cisco Smart Licensing will communicate their needs to a centralised Cisco hosted licensing system which manages the licensing requirements.

The licensing system can either be reached directly over the internet or via an on-premise server, which in turn talks to Cisco. The on-premise server is a great solution for large organisations with lots of devices.

Each smart-configured device periodically checks in with Cisco to report license requirements as well as utilisation. This feedback mechanism is the key to solving all the issues mentioned earlier in this article:

Once you get started with Smart Licensing you’ll never look back. Visit software.cisco.com today and explore the benefits further.

You may however still have a fleet of Cisco devices that are incapable of performing Smart Licensing because of their software vintage. But don’t let that stop you from enabling the newer generation of hardware and applications that are capable.

We've got a wealth of other blogs on new technology. Have a read on the latest in Wi-Fi 6 and Wi-Fi 6 E, or have a browse of our other blogs.

Wi-Fi Troubleshooting: How to Gather Evidence for a Wi-Fi Review: Part 2