Retail Warehousing is going through a revolution currently. There are many more robotic and automated warehouses in the pipeline, especially for supermarkets, where the supply chain is so important and critical for everyone.

Here's my rundown on key technologies for the retail warehouse.

Warehousing allows companies to bring stock to a central location in bulk from suppliers, split this into smaller loads for delivery to stores and customers directly.

Home delivery has experienced a rapid rise in popularity over recent years, in particular for supermarkets. The ability to pick a wide array of stock items, package into small orders, load into delivery vans and deliver to the end customer is critical in allowing supermarkets to provide convenience to their customers and differentiate their offering in a competitive market.

Here's my run down of the technologies to watch in the retail warehouse space.

Automation and Robotics are ground breaking technologies that are seeing a rapid uptake in new warehouse environments.

Modern warehouses are being designed and constructed with automation and robotics in mind from the project outset, ensuring that the warehouse can operate at peak efficiency.

Automated Guided Vehicles (AGVs) are commonly utilised to perform several repetitive, consistent tasks. They are most commonly used for picking/packing, where they can move stock around a warehouse without the need for human intervention, reducing risk and the chance of human injury.

These packing robots can often be utilised across whole warehouse floors, and are completely dedicated to order fulfilment.

The robots can unload delivery trucks on one side of a warehouse, break down the goods and store them, before packing them into smaller shipments which can then be loaded into delivery vans to be directly delivered to the customers doorstep.

They’re also capable of performing other routine tasks which need to be done repetitively, such as floor cleaning.

The popularity of home delivery is a massive driver for warehouse automation - robots can surpass human performance and have the advantage of working 24*7, with high rates of accuracy and consistency in stock picking.

CCTV and camera usage has seen consistent growth over recent years, particularly with IP cameras which are easier than ever to integrate into a network.

Cameras can be used for more than just security though, with Artificial Intelligence and Machine Learning used to deliver new functionality. Facial recognition allows tracking of staff members and determination of the number of people within a space (useful for COVID separation).

In the incidence of any WH&S problems, the ability to determine how and where people and equipment were operating is highly valuable.

Using the AI’s automated recognition, issues can be automatically reported, including unsafe behaviour such as speeding, heavy breaking, or crashes.

The field of IoT is experiencing a high rate of innovation and change, with new products and options becoming available every month. 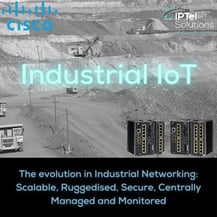 Coupled with automation and robotics, IoT offers the ability to sense, monitor and maintain business environments across security, safety, and efficiency.
This could be as simple as lighting sensors which dim the lights in aisles when there are no humans present, or temperature sensors to adjust the ambient temperature of the warehouse.
These small IoT investments can allow businesses to save money and operate more efficiently over time, which is good for them, and the environment.

There are a wide range of IoT options that can be deployed for different businesses, and warehouses include some very strong use cases.

Coupling sensors with automation opens up many possible options for warehousing environments, improving safety and performance, and ensuring a high ROI from the deployed technology.

Warehouses are moving to 24*7 operations. With the push for high levels of automation and robotics, the reliance on technology has never been greater.

Coupled with this that many of the systems are highly specialised and finely tuned, and you have a situation where redundancy of operations is critical. The warehouse managers can deal with routine faults, but the requirement to call in a manufacturer to return to site could be incredibly costly in lost productivity.

The lesson here: the network and equipment running the warehouse should be highly redundant. There should be no single point of failure even down to access layer.

Ultra Wide Band (UWB) systems will enable new technologies for warehouses and with this being built in to smartphones, the adoption of UWB will increase - especially as new applications are discovered and deployed.

Digital keys, and smartphone supported applications are likely to drive a future set of applications for UWB.

In the future, Wi-Fi will become even more important, as warehouses seek to deploy ever higher levels of automation via wireless AGVs.
A solid wireless deployment will enable a lot more technologies, even as we move to more standards-based devices – 5GHz only, WPA2 AES (ideally WPA3), 802.11k/v/r supported devices.
One word of note - as the Warehouse Wi-Fi network gets upgraded, you will also need to upgrade the devices operating on the warehouse floor.
Old legacy devices can really impact the performance of the network if they need to be supported, and are also quite likely to drop out and have poor roaming characteristics.

New technology can be expensive and difficult to deploy, however it offers a wealth of advantages over warehouses which are manually picking stock.

Robotics and Automation are major technologies in the warehouse space - they often require warehouses to be custom built for the purpose, but the ROI is huge - automated, accurate stock picking 24*7.

Wi-Fi is a massively key technology for warehouses and retail alike. Wi-Fi is critical for so many other new technologies, to enable mobility, as well as the rapid deployment of new technologies.

Retail faces many challenges, but with the flood of new technologies, it is also a highly innovative, fast moving vertical.

As a final note, IPTel are well experienced in operating in the warehouse and retail spaces - drop us a line if we can help with your project.